Even if you’re just an occasional speaker, you know that starting with a laugh is a good way to break the ice. You can tell a joke or grab a zinger from Brainyquote.com; however, as a professional motivational speaker/comedian, I can tell you with certainty that the BEST way to start your speech is with a customized line you’ve written and rehearsed specifically for that audience in that place, ergo:

1. Keep your antennae up and note what everyone sees and hears at the venue, because “Shared Experience” is golden fodder. 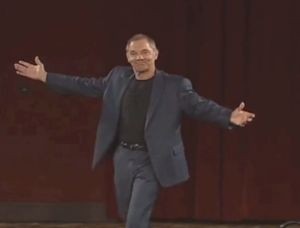 At one event, the walk from our cars to the venue was ridiculous, so my opening line killed: “Glad I got here on time. I didn’t realize the parking lot was in Albuquerque.”

A wild thunderstorm had been soaking Orlando all morning: “Nice to be here in The Sunshine State.”

As CEO Fred introduced me in Dallas, I noticed a fire extinguisher was on the wall directly behind the podium.  After a couple of opening remarks, I pointed at it and said, “I’d like to thank Fred for going the extra mile and providing this, because he knows that when I speak I do occasionally burst into flames.”

Great laugh, because the joke worked on several levels:

a) It seemed ad-libbed, which audiences love.

b) I included Fred, which delights and invests the group personally because someone’s (gently) teasing The Big Guy.

c) They relaxed instantly, safely in the hands of a professional comedic motivator.

2. Ask around to see if anything odd or funny has happened. I was elated to learn that the HR Director had made a complete fool of himself at a karaoke party the previous night. During the awards ceremony, I said, “The winners will receive this lovely trophy, and the losers will have to listen to Jim Braxton sing “My Way.” Note: the five words that trigger the laugh are placed last.

3. Watch for The Gorilla in the Room (that the organizers hope nobody notices).  “Bob Smith” spoke earlier in the day, and avoided his “key” light so he was basically in the dark. I gave the lighting director a heads up, and during my speech I stopped, squinted, and said, “This is a little bright, Jay. Could I have some Bob Smith lighting, please?” The room suddenly went black except for a tiny spot 30 feet away, and the crowd howled. I added that Bob had apparently joined the Federal Witness Relocation Program, and kept the laugh rolling.

4. Study printed materials for terminology. Until I worked for Anderson Windows, I didn’t know there was a general term for a building’s windows and doors. So I told them that until I studied up on their industry, I thought “fenestration” was the process of sterilizing people from Finland.  They instantly knew I had done my homework and written that joke specifically for them, and they rewarded me with a big laugh and applause.

5. Picking up on mistakes other people make onstage can be gold.  Out of habit, the president of an Atlanta-based company said, “We’re so glad you could all join us here in Atlanta.”  The audience tittered, the president said, “What?” and somebody said, “We’re in Miami,” and the president was slightly embarrassed but laughed it off. Onstage, I said, “Great to be here in Atlanta or Miami or wherever the hell we are,” and of course The Big Guy laughed louder than anybody.

If you speak often enough, save the jewels and adjust them to fit the situation. I predict that one day an audience is going to bust a gut when I toss out an ad-lib about a fire extinguisher.