Driving through the Smoky* Mountains recently, I was reminded of the time I kicked off our summer vacation by nearly killing my parents. Now part of family lore, the episode was a knee-buckling example of the adage that God watches over morons. (*Look it up. That’s how they spell it at the park)

I grew up on in a marshy area that was as flat as a mud puddle. We used to go to a construction site and play on a 20-foot-high pile of dirt, which was the highest point of land I’d ever seen until the fifth grade. When I was 12 and my brother 10, our parents took us to the Smoky Mountains. The terrain was as mind-bogglingly alien to us as Jupiter’s moons. We couldn’t process the fact that we could look up and see rocks a half a mile up in the sky. We started begging Dad to let us climb one, and he finally pulled into a rest stop and we sprinted to the base of a mountain and began our assault. 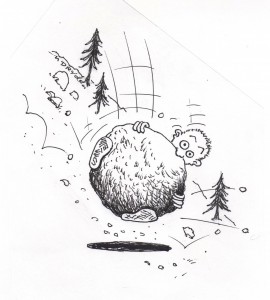 When we got about 60 feet up, Mom took a picture. Fantastic. We’d have photographic evidence to show our fellow swamp rats that we’d climbed a mountain. Finally, my dad yelled, “That’s high enough.” We sat there 100 yards above the parking lot, savoring the moment. Being a boy, savoring got old quickly. I had to do something with the moment. I noticed a roundish rock about the size of a small washtub, so I braced against a tree and shoved with my legs and found I could make it jiggle. I said to my brother, “Let’s see if this rock will make it all the way to the bottom of the hill.”

Understand that this was the first mountain I had ever actually touched, so I knew nothing about the physics involved. Back home, to get something that big and heavy to go anywhere at all was a major project involving men and machinery, and I was a skinny 12-year-old. My brother declined to help, being a future judge with better judgment than I. So I shoved and strained against that brute until it started down the hill, and I immediately saw that it wasn’t just going to make it to the bottom–it might make it to Gatlinburg.

I screamed, “Daddy!” and my poor dad looked up to see a 200 pound battering ram screaming down that mountain like a runaway train, headed for cars, kids, families. He ran around screaming for everybody to get out of the way and then watched helplessly as that rock–now going probably 60 miles per hour– missed our car by about six feet, bounced across the parking lot, and disappeared into the woods on the other side after hitting…nothing. It was a minor miracle. My mom sobbed into her hands. My dad leaned on the car to keep his legs from collapsing under him. I looked at my brother, who was looking at me with an expression that was easy to read: “Dead man walking.”

I knew exactly what was waiting for me. I climbed down very slowly to give my Mom as much time as possible to remind Dad that he had wanted children, and to give Dad some time to cool down so his response would be measured. The belt stung, but he didn’t cross the line into child abuse. He impressed upon me the fact that education doesn’t stop when school is out, and put particular emphasis on a lesson in rock technology that I will never, ever, ever forget.