The longer I’m married, the more I realize that men and women’s brains are wired as differently as circular saws and curling irons. Not even close. Their divergent evolutionary paths no doubt began when the couple with the charming brow ridges realized that since the woman had baby food hanging conveniently right there under her collarbones, it made practical sense for the larger knuckle-dragger with the combative personality to go out and kill brunch.

That basic division of labor led to chasms between our points of view, of course, which then inevitably led to in-house Rules of Conduct, e.g., Rule 1: Don’t lurch into the cave smelling like wildebeest entrails and expect baby-making activities to ensue. To this very epoch, couples make rules, of course, because what one considers perfectly acceptable behavior drives the other one vein-bulging mad. 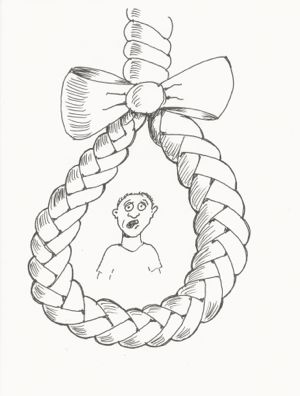 For example, I work for clients who give me SWAG (for the uninitiated, the PG translation is “Stuff” We All Get), so you might look at the cap I’m wearing and think I know something about medical supplies, The Missouri Lottery, or road-grading equipment. I don’t, but since I hate to throw away a perfectly good anything, my wife has capped my cap collection at 20—if one comes in, one goes out. Same thing with my Company-Logoed Briefcase and Gym Bag Collection. Again, Goodwill has saved our marriage, and Sweetie Cakes has more room to keep lamps we don’t use.

I was forced to make a rule a few years back as a result of a well-documented law of human nature: Men—okay, straight men—can talk to each other about hair for about seven seconds before it gets uncomfortable, and women can talk about hair virtually indefinitely. When a bunch of buddies meets up at a bar or a game, you won’t hear anybody say, “Steve! Your hair looks fabulous, buddy! Are you still going to The Hair Fairy?” And chances are Steve’s not going to say, “Oh, I can’t do a thing with it, but I’m headed to the men’s room to try this new product. Wanta come?”

One night in L.A. we were dining with another couple when the women started talking about hair—apparently heat and low humidity distresses tresses—and about eight soul-killing minutes later, I was forced to make the Two-Minute Rule, which is how long my wife is allowed to talk about hair in my presence before we change topics. I had to, because they can babble for hours about highlights and tints and frizzing, and the conversations are sometimes downright tragic, like for our friend Charlene: “Oh, God, when Christopher left The Clip Joint I didn’t know what I was going to do! I was lost! I couldn’t go back to Crops and Bobbers—you know about Blaine and that nightmare, God. I went on Facebook, I even thought about swallowing my pride and going to Shear Madness, I put out feelers…”

Feelers? Jeez. He’s not clipping out a kidney, sweetheart. I’m grateful it’s so simple for us guys: “Honey, I’ve got a bug-feeler growing over my ear. Will you clip it for me?” That’s the only hair feelers I deal with.

And our hair conversations tend to be quick and much more light-hearted: “Hey Jimbo! Did you just get a haircut, or did you back into a weed-eater, haaaaah! No, just kiddin’ you buddy, looks good. I bet you are just The BOMB to all the other mental patients! HAH!”