Upon hearing the news that airlines might now allow cell calls on flights, I assumed that Edward Snowden had revealed the disturbing information that operating cell phones on airplanes is no longer a safety issue. You’d think an explosive secret like that would be closely guarded to maintain tranquility at 37,000 feet; and surely any civilized society that sees the joy and value of Santa Claus and the Tooth Fairy would want to keep that very beneficial fiction alive as long as possible. So I was stunned to learn that the beans were spilled by the FCC – of the very government that’s supposed to protect us from morons of all stripes. 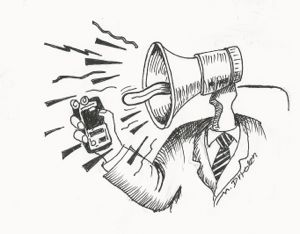 Even though I fly as frequently as the average cormorant, I confess that I’m a tad ambivalent about the issue.

On the one hand, I probably get annoyed more often than average because I spend whole chapters of my life in airports, where you’d think signs were posted saying: “As a discourtesy to your fellow passengers, please talk as loudly and obnoxiously as possible on your cell phone, block the moving sidewalk, and take up three seats in the gate area with your carryon luggage. Thank you!” As soon as somebody comes up with a device I can secretly aim at a cell phone and heat it up to 400 degrees in 10 seconds, I’m buying, price be damned.

On the other hand, if the airlines allow inflight yakking, I’ll be a witness to that short but violent chapter of our nation’s history: “Enraged Passenger Flushes Cell Phone” — “Loud Talker Bombarded with Barf Bags” — “Cell Phone Brawl Erupts, Pilot Forced to Land.”

And of course every passenger would have his own story: “The guy’s right behind me, and he’s RELENTLESS, so finally I pop an Oreo into my mouth, unbuckle my seatbelt, turn around and prop my chin on the back of my seat. He squirms a little and gets about half a decibel quieter when he sees me glaring at him from 18 inches away. Then I start chewing with my mouth wide open — it’s SHOWTIME! — and gooey little drops start collecting on the top of the seat.

“He looks kind of nauseous and says, ‘Hey! You’re dripping on the seat!’

“And I go, ‘It’s MY seat, Bullhorn Boy. I’ve got rights, too. Wanta see what a half-digested turkey wrap looks like?”

I aim to be an activist on the front lines — a Jackie Robinson for the movement, if you will. I’ll buy hundreds of whistles and give them out at airports with a flyer telling like-minded folks to blow them when a cell phone abuser gets too loud — a new definition for Tweeters.

After a month of refereeing shouting matches and fistfights, flight attendants will walk out and refuse to come back until the cellular instruments of Satan are banned again. Then we can go back to being annoyed only by card players, squalling babies, and loquacious pilots trying out their inflight jokes.