When I describe the many wonders of our new hometown of Louisville to out-of-state friends, the first two things I mention are the free concerts and the biannual junk pick-up.

Since this column is read by many unfortunate souls who don’t reside in the Urban Services District, an explanation is in order: twice a year—usually in May and November—the city announces Junk Set-Out dates. After 4 p.m. on a Friday you can start hauling out your mildewed mattresses, icky sofas, broken refrigerators (doors off for safety), bald tires (limit four), huge plastic toys your children stopped playing with long 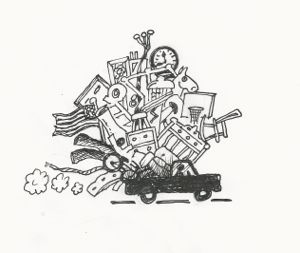 before they left for college, and pretty much anything else that won’t blow up or bite you.

This means that at 4:01 p.m. on that day, 9,000 pickup trucks start prowling every street and alley in the USD, hauling off everything of value (an extremely subjective call, obviously—one man’s trash is another man’s treasured two-legged table or macramé wall-hanging with cracked mirror), leaving only a few stinky settees, kinked garden hoses, fractured toilets, rotted fencing, plastic hose reels, and enough filthy, beige wall-to-wall Saxony to carpet New Jersey. All of the semi-valuable items still on the street on Monday morning fit into a city station wagon. Is that brilliant or what? The city announces it’s going to pick up everybody’s junk, and hordes of bargain-hunters race in and haul it all off with no cost to the taxpayer! Not only that, but these dedicated recyclers have to buy gas, snacks, and meals while they’re collecting, then cool off with some adult beverages to celebrate their haul! Just by putting the word out, we jettison our superfluous tonnage for free AND stimulate the local economy! Genius!

Of course, most of the rules are broken, but almost everything gets scooped up anyway. Two exceptions are the kinked garden hoses and plastic hose-reels, which nobody wants to touch because they aren’t disposed of as much as they’re exorcised. Satan obviously uses them to goad even the most pious homeowner into a spitting fit of burning rage: “Forgive me, Father, for I have blasphemed a deep double blue streak while chopping up that $#@!&%! garden hose that got stuck in the cheap #$@!&%! hose reel for the fiftieth $#@!%&! time. Sorry.”

“I empathize, my son. The one at the rectory is driving me &%$#@! insane. Sorry. Go untangle it for me and say five Hail Mary’s and we’ll call it even.”

Just another reason I love living in my neighborhood: Biannual Catharsis.