After an extensive walking survey of my neighborhood, I’ve made a startling scientific discovery: Bud Light and Marlboro cigarettes both contain a chemical that forces their consumers to throw the empty containers directly into the street. Since numerous studies reveal that people have only syndromes, disorders and diseases and no control over their own behavior, these prolific litterers obviously have an as-yet-unidentified medical condition. I’m confident that researchers will soon discover a new brain chemical—uncouthaphin, or ignoramazone—that will absolve them of any personal responsibility.

A support group will no doubt form, and the Association for Society’s Sadly Hardheaded Oafs and Louts of Epic Slovenliness—whose acronym is already in common use—will decry the way the “neat freaks” of the world castigate them for their genetically-determined trashiness. 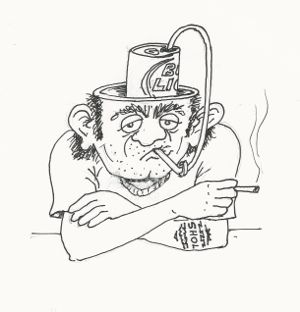 Some would argue that Bud Light’s solitary redeeming quality—that it gets you drunk—is the reason the consumer loses any sense of social responsibility when he/she drinks the alcohol-laced fizzy water; but other brands have the same effect, and I rarely see them flattened beside the curb (ironically, I see over-served fans of Bud Light flattened beside the curb downtown fairly often). So what’s the explanation? Could it be that only one member of the Association is driving around my neighborhood tossing his cans out the window? I doubt it. I think researchers will someday discover that habitual drinkers of cricket-urine-based beverages like BL obviously have a number of brain conditions that predispose them to boorishness. Smoking cigarettes exacerbates the condition, of course, since nicotine obviously deteriorates community consciousness as fast as it does lungs—the world is my ashtray, and if you don’t like to breathe my smoke, Nature Boy, then go somewheres I ain’t, like a liberry.

And speaking of health obsessions, my wife and I try to power-walk every morning, which means we do it about twice a week, and it’s fascinating what you can learn about 21st Century civilization just by gliding through it at street level. In addition to the discovery of uncouthaphin, for example, I’ve found that the contents of recycle bins reveal an astonishing diversity of lifestyles in our neck o’ the woods. Some people, e.g., apparently couldn’t care less about the sweatshop policies of a certain billionaire and manage to survive exclusively on Papa John’s pizza. Others consume enough generic canned soft drinks from Costco every week to float a double-wide.

After we’ve had a party, I stack the beverage bottles in the garage and bring them out a few bottles at a time (okay, so I might sneak a few into the neighbors’ bins as well). Otherwise our neighbors might think we’re stumbling drunks who do our impression of sober people when we greet them in the ‘hood. Stacks of bottles might also be an indicator to burglars that the residents are so wasted every Sunday morning that they can waltz in anytime before 9 a.m., step over our catatonic carcasses, go on a leisurely shopping spree, and even grab a few Bud Lights from the fridge. Oh, sure. I keep a six-pack in there for burglars. That way they’re not tempted to grab something with a label they can’t read.