What is it about an impending wedding that drives women insane? Okay, not all women, but enough of them to shame the gender. I thought I was aware of the most common aberrant pre-nup behaviors—starvation diets, lavish spending for an outfit she’ll wear once, hiring armed guards for ice sculptures—until I read an article about how plastic surgeons are making millions tweaking brides (and, alarmingly, their mothers!) so they’ll look more like Barbie on the big day. Manicurists and hair 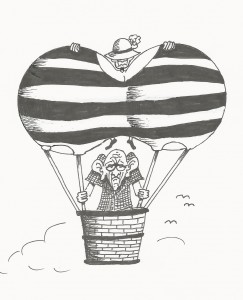 stylists are still useful, of course; but if the procedure doesn’t require anesthesia, it’s apparently not sufficiently transformative for the modern bride. They’re whacking and botoxing and augmenting to beat the band and bowdlerize the blushing bride. They’re even having botox parties for the bridesmaids! Hideous matching outfits aren’t enough anymore. Now they must have hideous matching pouts—a garish school of ladyfish blowing champagne bubbles.

The irony, of course, is that presumably the victim—I mean groom, sorry—popped the question because he found the one woman on earth who’s perfect for him in every way. And now that he’s committed, her first official act is to make permanent alterations to the package he proposed to? Come on. To me, that’s a rather egregious bait and switch, like a groom showing up at the church with a brand-new five-inch tarantula tattoo on his neck (“Bitchin’ bachelor party, Brad!”). I married the cutest little leprechaun on earth, and would have been horrified had I raised the veil to find a botoxed and basketball-boobed Barbie. Brrr.

I have to think a lot of guys would feel the same way. What if the guy really liked the original model and recoils at the options he didn’t ask for? Maybe he loved her little tush just the way it was and doesn’t like the rubbery squish-bag she had implanted. Maybe he rather enjoyed the natural pliancy and easy handling of the 34 B’s, and isn’t entirely comfortable scaling the taut new plastic twin peaks. And, of course, when he’s bent and shriveled, creaking along on his aluminum walker, she’ll be beside him, shuffling on wrinkled stalks, but with the dual dirigibles still plowing proudly ahead, holding up the rest of her sagging body like helium balloons. Seems to me he should at least have a say in how gracefully they’re going to age together.

“Jason, do you take Sarah, and all the things that aren’t quite Sarah, until death do you part, with the knowledge that some of her parts have a half-life of 400 years?”

“Well, gosh, I don’t know. Is that botox going to wear off, or is she always going to look like she’s about to say ‘poot’?”

Seems to me if you’re going to get a pre-nup tuck or implant foreign substances, you should at least clear it with the guy who’s going to sleep with it for the foreseeable future. Of course, that leads to the first of a lifetime of fraught questions and marital Catch 22s. If he says No to the surgery, he’s a controlling tyrant who doesn’t let her make her own decisions. If he says Yes, he doesn’t like her body and wants her to hack off chunks of it and pump up others so she’ll be worthy of his devotion. Makes “Does this dress make my butt look big?” seem easy: “No, honey, bacon-burgers, Gargantuan Guzzles and never moving it made your butt look big.”

Where will spiffing up for a wedding end? Liposuction for the 10-year-old ring-bearer? Laser fuzz-removal for the pre-teen flower girls? But I’m probably years behind, as usual. A Kardashian has probably already scheduled the procedures.