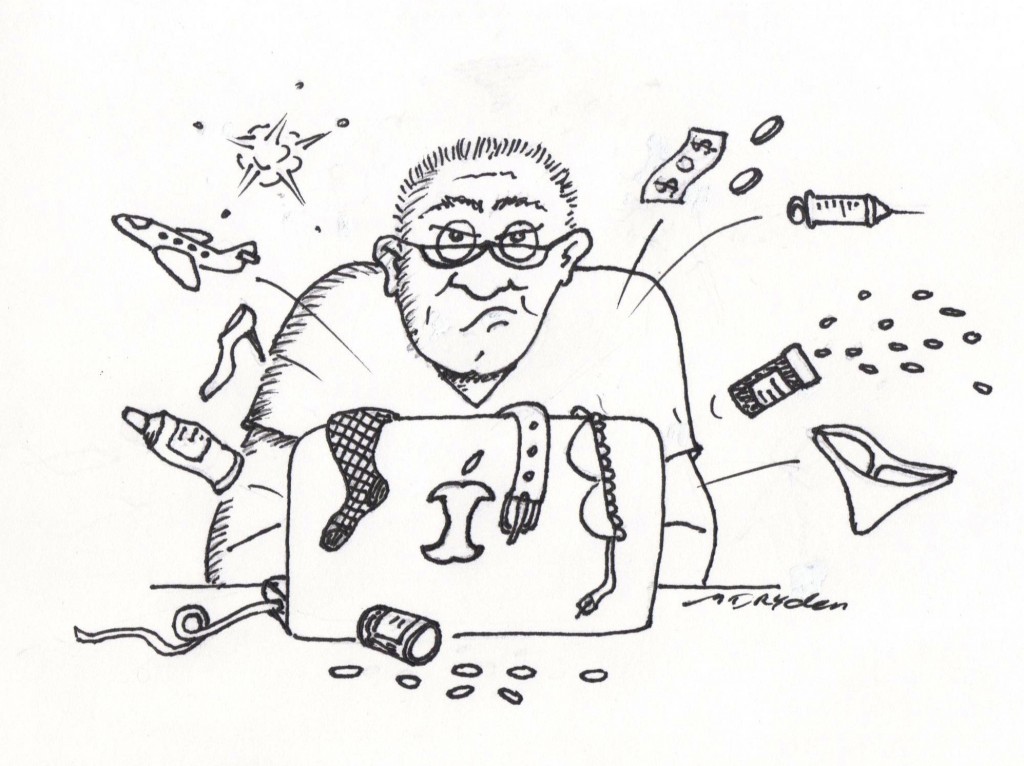 The avalanche of such offers puzzled me, because I really don’t visit web sites that suggest I have a burning desire “to make hot Russian babes scream.” The mere thought disturbs and exhausts me, and makes me shudder to imagine the seething mob of vodka-fueled Ivans and Vladimirs I might antagonize in the process.

Then at a party I heard a klatch of women laughing about all the Viagra ads and offers to Enlarge their Manhood they were flooded with daily, and I felt much better. Apparently the sleaze-balls who claim they can transform cocktail weenies into bratwurst take the shotgun approach. If they’ve got your email, they’re going to try to sell you the dream of genital grandeur whether you’ve got the required equipment or not.

They used to really annoy me, but now I just accept the wild claims as unsolicited entertainment. “Be the star of your neighborhood with your new love machine.” Hm. Not in my enclave, I don’t think. I know MY neighbors wouldn’t be impressed, and the dinner invitations would no doubt drop off. Loved this one: “So hard you can break an egg.” Wow. Would anyone really want to, even for “America’s Got Talent”? I guess it would bring a Benihana-type excitement to breakfast, but a) I’d hope to find a more constructive use for the condition, and b) the logistics just don’t appeal to me. I think if I demonstrated such a skill for my wife, she’d probably go with a bran muffin that morning. After reminding me where the cleaning supplies are.

I’d say that roughly 99% of the spam I get is comically misdirected. Right under a pitch for a Miracle Enlargement Pill, for example, I was asked if I’ve tried the “new Vaginal Mesh Patch.” I haven’t, and frankly wouldn’t know where to start. Spackle came to mind, but for what?

I was chagrined to see that “Single Christians” in my area are looking for me. They’re obviously not looking very hard, because I’m not exactly in Witness Protection. But if they’re really looking for a thoroughly married man, then that’s not very Christian of them. Apparently Black Singles Over 50 are also interested in finding me—Christian or pagan wasn’t specified—but I’m afraid they’re going to be very disappointed if they find me.

Awkward English gives away a lot of scammers. The instant I saw “Your pre-approved for a $5,000 loan,” I knew I wouldn’t be doing business with a financial professional who hasn’t mastered basic contractions.

Even if I wanted to “Get Hight Quallity Pills Without Perscription!” I probably wouldn’t trust my life to a pharmacist whose pitch read like a ransom note from a Somali pirate.

I found the come-on for Humongous Bouncing Boobies both eye-catching and amusing; but again, wrong target audience. I’m just not a fan. Mountainous breasts have always intimidated me, like I wouldn’t be man enough to make them happy.

Today’s offerings were particularly dramatic. Someone has allegedly “Run A Background Check!” on me, apparently to see if I’m actually qualified to start my “New Career in Law Enforcement!”

I can see I’m not even going to have time to order my “Amazing Genie Bra!” that eliminates rolls, wires and adjusting straps. Glory. Humankind is saved.