Researchers probably have mixed feelings when they’re baffled by the results of their own study. On the one hand, nobody wants to do a study just to be baffled. On the other hand, the quickest way to get a lucrative research grant is to be a baffled researcher with a furrowed brow and a burning question.

Recently a team was confounded to discover that today’s teenagers are having 28% less sex than teenagers of 20 years ago. I was frankly surprised by the finding myself, not that I spend a lot of time monitoring teenagers’ torrid backseat adventures. I’d wager that a lot of folks assume as I do that our society’s apparently inexorable slide into moral depravity (e.g., Beyoncé’s Super Bowl lap dance in her panties) is accompanied by a corresponding number of sweet sixteeners doing the horizontal boogaloo. 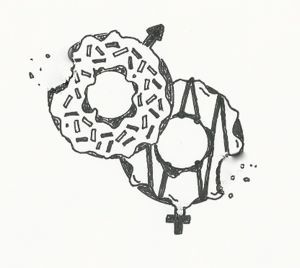 Apparently not. I, too, was confounded; and I must confess it felt great to be intellectually equal to brilliant social researchers for a change.

I figured the answer had to lie with the electronic connectivity that obsesses today’s teenagers, since most of them seem to spend more time looking at hand-held devices than holding hands. Maybe they’ve evolved to the point that sexting has replaced contact with actual quivering flesh, and furiously flashing thumbs can somehow quench the desire of the most needy hormone. And consider this: in the privacy of their own bedrooms, today’s teenagers have 24-7 access to porn…AND super-athletic thumbs. So it could be that they’re not only sexually satisfied, but just too darned exhausted to go to the messy trouble of finding a living, heaving partner.

Still, I had no numbers, no stats, no empirical evidence that the World Wide Web stifles schtupping, so I was still as bewildered as the researchers. Then I happened upon the fascinating statistic that 28% more teenagers are obese than teenagers of 20 years ago. Hmm. Could that be a Eureka Moment? Should I suggest to the flummoxed researchers that they might be overlooking a basic anatomic/physics issue? That maybe fewer teenagers are hooking up because they can’t, you know…hook up?

I’m sure I’ll get a few outraged letters from obese people who are as proficient and busy as minks (PLEASE don’t send photos), but it seems to me that the ultra-overweight have a couple of challenges in the sexual arena: a) a large percentage of the 72% of Americans who aren’t obese probably aren’t interested in bumping bellies with them, culling the partner-pool considerably; and b) if another obese person wants to make a mammoth beast with two backs with them, they’ll probably encounter a docking problem.

Thus it is my carefully-considered conclusion that teenagers today are having 28% less sex due to widespread addictions to both the internet and super-sized junk of every variety imaginable. In my crusty view, it serves them right; and we might have to thank our lethargic millennials for slowing the population explosion.