If you parked a slightly-used but fully functional Harley-Davidson on your lawn among your other yard-sale white elephants and put a $20 price-tag on it, an Early Bird would run his hand over the buttery leather seat, nudge the brand-new tires, note the gleaming paint job and flawless chrome tailpipes, then ask if it runs well. You’d start it up, rev the full-throated engine just enough to make the neighbors pray that it sells, and turn it off. He’d cock his head, squint thoughtfully and say, “Would you take ten for it?”

Yard sales are nature’s way of allowing a city’s residents to transfer their unwanted possessions to each other’s homes without the awkwardness of going door-to-door. Haggling is expected, of course, but your approach can be either neighborly or insulting. We’ve had several yard sales to clear our unintentional collections, and we’ve found that the same characters show up no matter where you are. 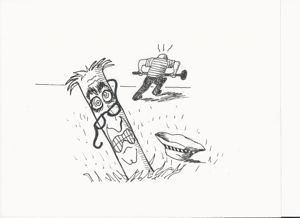 The Haggler From Hell comes to mind. After we got a DVD player a few years back, I put a $20 tag on our perfectly operational VCR, thinking that surely someone who had a stash of VHS tapes would quickly snap up a $160 piece of electronics at an 87 percent discount. I had it plugged in and operational for skeptics, and sure enough, an HFH checked it out. Crossing his arms, he said, “Would you take ten?” I frowned, shrugged, remembered that I just wanted to get rid of it and said yes, I’d take the ten. He said, “Let me think about it,” and continued inspecting our junk. While I fumed, I sold a pile of miscellaneous kitchen utensils and a few towels to a sweet woman who appreciated the bargain. Then the HFH ambled back over and said, “I’ll give you five.”

Maybe it was the arrogance of the declarative sentence that set me off. “Stay right here,” I said. “This’ll be fun.” Then I walked into my garage and came back with a ten-pound sledgehammer. I set the VCR on our concrete driveway and said, “I’d give five bucks for an adrenaline rush, so I’ll break even on this. Stand back, I don’t want you suing me for getting shrapnel in your ankles.”

He backed away, stammering: “Bu—shrapnel? What? You’re not guh—?”

I got a good grip, swung the sledgehammer into slamming position, and he blurted, “Wait! Wait a minute!” I stopped. He gave me a weak grin and said, “Okay, I’ll give you ten.”

“No thanks,” I said. “I’d rather smash your VCR,” and I cocked the sledgehammer again. I couldn’t smash my VCR, but I’d thoroughly enjoy obliterating his.

“Hold on! Wait!” he said, and I nearly sprained a shoulder putting on the brakes.

Attracted by the commotion, another guy walked over and asked why I was going to kill my VCR.

“Because I won’t give him twenty bucks for it!” huffed the HFH.

“Hmph. Does it work?” said the other guy, clearly interested.

“Hey, wait a minute!” the HFH protested. “I was here first!”

“I’ll give you twenty bucks for it,” offered the new bidder, whom I liked very much.

The HFH griped and sputtered and railed at how unfairly I was treating him, and I was enjoying it so much I just couldn’t resist: “That’s okay,” I said. “I’ll take ten.”